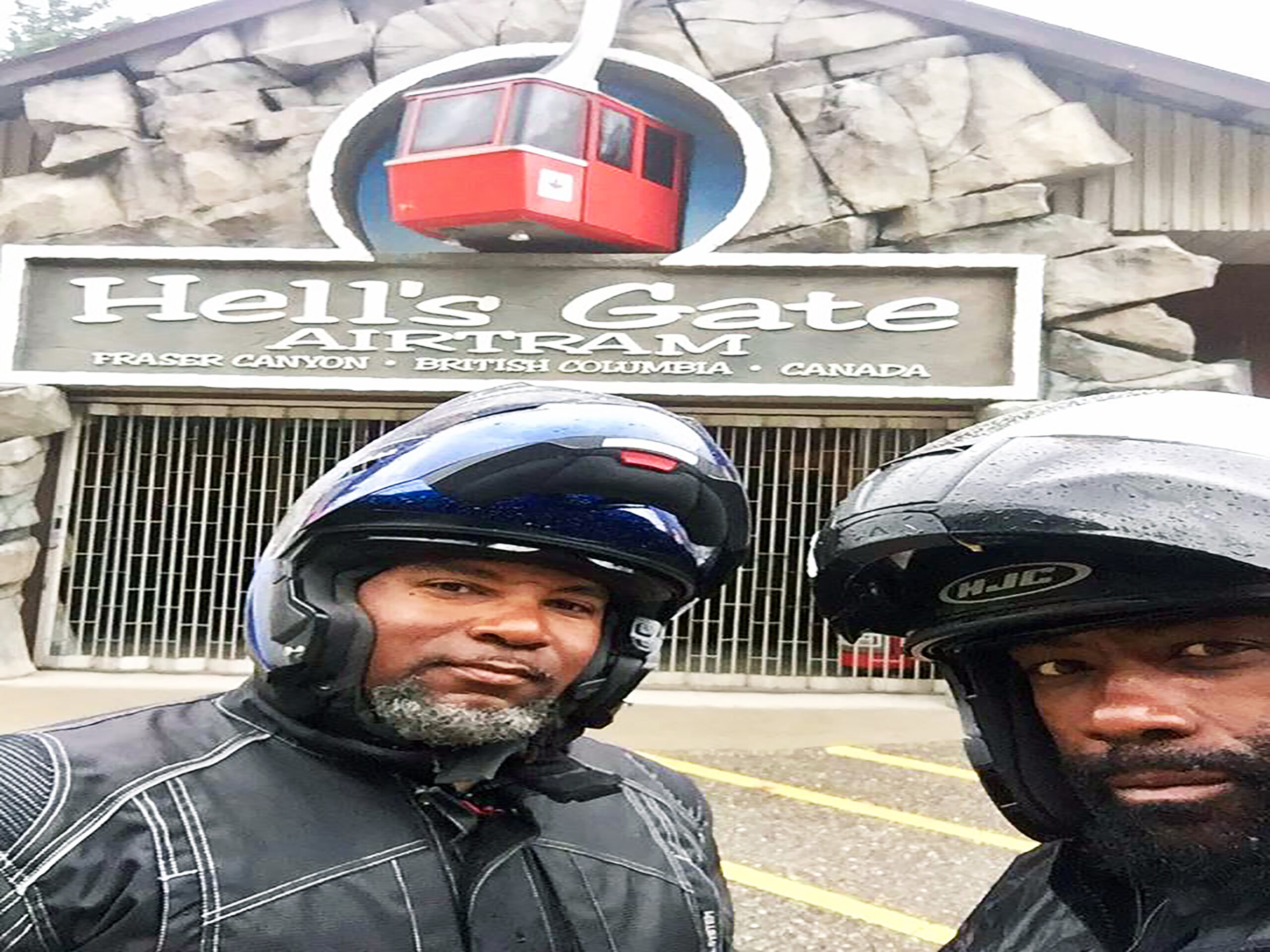 Who would have ever thought, a simple phone call would end in such an amazing journey??! After all, isn’t that how all epic adventures begin? Well, not exactly, because this epic adventure started with a few laughs, that turned into multiple phone calls, eventually leading to the OFFICIAL count down!

Shareef “Reef” AsSadiq of Chosen Few Motorcycle Club and I came in contact through social media. Reef lives in San Diego, California and I am with DAHURU Motorcycle Club based out of Raleigh, North Carolina. Reef and I both enjoy long distance riding and sharing our journeys with friends and family on social media. The buildup, preparations and anticipation of the upcoming ride became a daily phone call. Reef would call me and I would call him. The running joke quickly became “Yo! Is it May yet?”

This epic run was about a year in the planning. I had completed the Southern California Motorcycle Association’s USA Four Corners Tour, a 50 CC Run (Cross Country in less than 50 hours) and other Iron Butt Association runs. Reef had completed the 48/10 IBA Run prior to our trip, with Highway Smiley of the Kings of Cali Motorcycle Club, a 50 CC, and numerous 1500 miles/24 hours and 1K Bun Burners IBA Runs. Through communications between Reef and Jim Saul, another Iron Butt Association member, Jim came on board with the ride. Jim has completed numerous IBA runs as well. The intent was for each of us to take the lead of a portion of the ride. The anticipation to Day Zero was the most grueling because we were itching to start the ride. 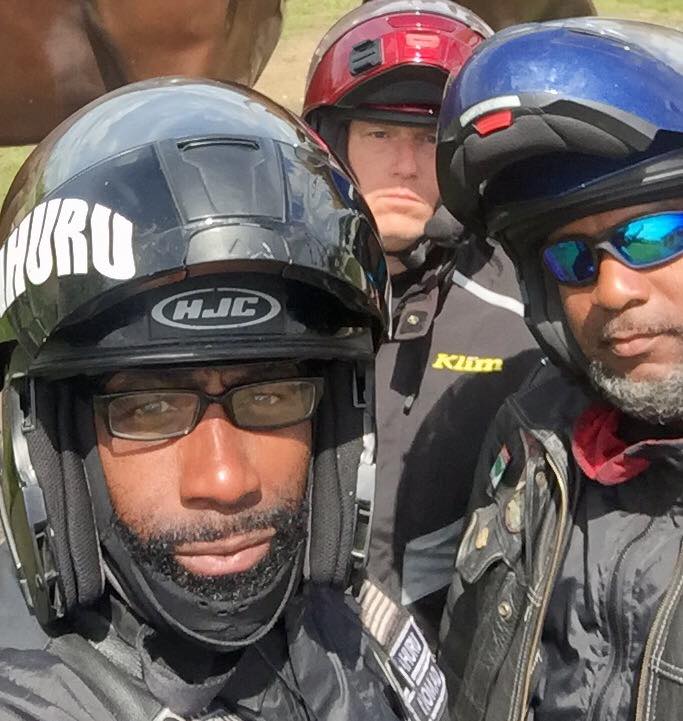 Finally, D-Day was upon us. Reef pushed out from San Diego, knocking out a quick 1500 miles in 24 hours! The reality of the ride started to come to light. Jim, being from Florida, had already rode to Key West and snagged his first point of the 4 Corners. I pushed out to link up with Reef in Lake City, Florida so we could head down to Key West together. It was here, Joseph “Snoop” Smith of Black Sheep Riders Motorcycle Club out of Jacksonville, FL, escorted us down. The feeling was great to finally start riding together and getting the feel of each other’s riding style. The underlying joke was Indian vs Harley-Davidson and we both (Reef and I) were proud of our respective machines. It was on this first stretch that the highway shenanigans began. I knew this was going to be a great ride because we both loved being on the open highway. The freedom and the roar of the engines was our high. We quickly got into our zone, and being extreme riders, it didn’t matter which side of the highway we were on because we got into sync and could almost predict each other’s next move.

We arrived in Key West under bright, sunny skies, with a slight cloudy overcast. The water was bright blue in color and the ocean looked incredible from the Seven Mile Bridge. I must admit, from the Blue Wall to Key West is the longest 100 miles you will ever travel. We rode the strip and made our way to Mile Marker 0 for a quick photo opp. After strategically placing a few Havelron/WillTravel stickers, we made our way to the famous Southern Most Point buoy and U.S. Post Office for photos for our first point for the 4 Corners run.

The next morning, we hit the ground running…… photos, gas up and grabbing breakfast at a little Cuban restaurant, where the coffee could peel the paint off a ’76 Chevy Nova. There’s a few things that Reef and I share, and one is that we both love to eat. I told him about a seafood restaurant by the name of One Love Restaurant ‘N Seafood that served delicious blue crabs and crab legs. It was on and popping from there. Detour up ahead. After grubbing we made our way to Jacksonville to link up with Jim. Along the way, my club brother Que-Ball ran us down and escorted us up to Daytona. It was much appreciated.

Jim was the tech guy of the group. He ran two or three different navigation systems, weather and traffic alert systems, on board laptop and one badass Yamaha FJR1300 touring bike. After our quick introductions, Jim immediately briefed us on our routes and stops. I could tell this wasn’t his first rodeo. After bunking down for the night, we woke around midnight to gas up, get receipts and beat the traffic and impeding storms. Now this is where the journey truly begins; from the moment we crossed the Florida/Georgia line, our time to ride the lower forty-eight states plus one began. From this point the journey became a vast array of highways, rolling mountains, greenery, smells and sounds of SC, NC, VA, WV, MD, DE. From us stopping to assist a broken-down biker on the side of the highway, to sharing laughs at the gas stations created memorable moments. At the same time, we squeezed in a few Tour of Honor sites. We were escorted by Felton “Hundon” Rodgers of Ft. Washington Chapter of Rarebreed Motorcycle Club from West Virginia to Maryland.

We made our way to Wilmington, DE and linked up with Tony “T-Time” Handy of Speed Shifters who escorted us up I-95 to Trenton, NJ. It wouldn’t be a journey if it was all smooth sailing. This is where we were introduced to the hellacious New York road construction traffic. The Bronx Expressway- East Tremont was not a friendly place to be on a motorcycle at midnight. After a traffic accident that split us up and one member ended up taking the scenic route through downtown New York, we finally linked up with our final East Coast escort, Bebo Kount Lopez of Latin Riderz MC New York. We appreciated the escort and the gift.

In the 18,000+ miles traveled on this journey, there were plenty of notable moments.  From this day forward, every time we hear the word “border” we all three will burst out laughing. Seeing a live moose in the wild and the sheer size of it was amazing. The feeling you get when you stand at the site of America’s First Mile in Kent, Maine is incredible. Walking through the Four Corners Park and seeing a landmark of America’s motorcycle tradition in Madawaska, Maine was spectacular.

North America is such a beautiful country. Even though we were on a time schedule we still made efforts to take it all in. The back roads of Bow, New Hampshire, where out of the blue we bumped into Jim Alton at a gas station, who snapped a picture of the three of us getting back on the road, truly signified the magnitude of our journey.

Riding in Canada was truly marvelous. Though it was cold, the ride was scenic and full of beautiful curves. We met interesting people in Prince George, ate at great restaurants and experienced an entirely different culture of Aleutians and Native Americans. Most of our ride to Alaska was through British Columbia. It was fun, all-natural, rustic and resembling of the wild, wild West. The brightest highlight of this portion of the ride was coming upon the Bear Glacier.  What a phenomenal sight!  Standing that close to a natural wonder that has been there for thousands of years was breathtaking.

After successfully completing our 48 states in 10 days, we rode up towards Hyder, Alaska. It was such an emotional experience.  We had been on the road riding for eleven days.  I had viewed Alaska as the goal.  Having never been there, I was overcome by a deep feeling of pride and accomplishment.  The finish line was in sight and I stopped my bike, dismounted and walked the few yards to the Alaska state line.  As I crossed into Hyder, Alaska, I raised my arms above my head in victory.  We did it! We really did it! 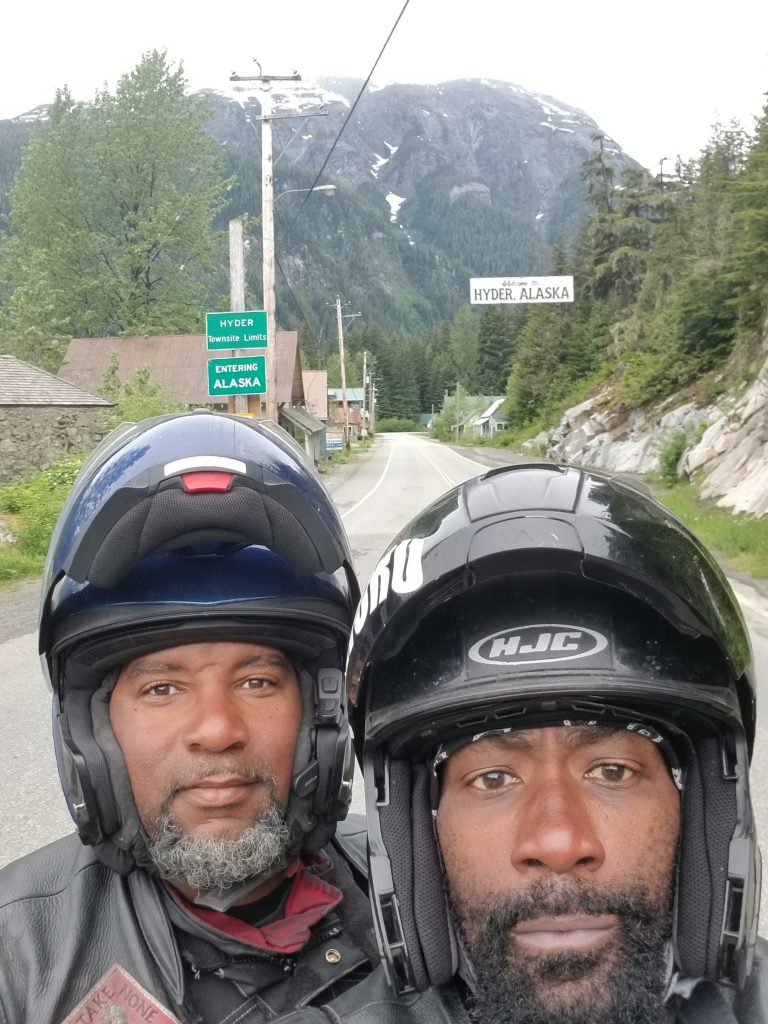 We hung out in Hyder for a little bit taking pictures, meeting people, and reveling in just being there. We decided to head back to Prince George, and begin our journey back south to ride the Border2Border Run from Surrey, Canada to Tijuana, Mexico.  We were excited about this next run because we were nearing the end of our journey.  We were exhausted to say the least. We completed the Border2Border Run in 22 hours and 30 minutes. We flew like the wind!

We truly met some wonderful people on this journey. We also had great people on our team. Just to mention a few: Arthur Del Lonnquist and Linda Darelius, a father and daughter team, who are currently riding in Alaska as I write this article. Kerry “Island Girl” Raquel, who without her confidence and determination to see us make the deadline, found an alternate route (Plan B) that saved us five hours of riding time. Joyce AsSadiq, who held down the home front that kept my partner’s head in the game, even when things looked at its bleakest. Patricia Yates Saul, who clearly understands Jim’s need to wonder. Darrell “Heavy D” of Seattle Magic Wheels Motorcycle Club escorted us into Seattle and up to Blaine, Washington. My club brother Chris “Myster Hyde” Bluford waited beside the highway for hours to escort us into my forty-eighth state. Allison “A-Boogie” Saunders for assisting with logistics. We couldn’t have gotten into Canada without you….and all the countless people who followed us on social media and encouraged us to keep pushing and to keep inspiring others. We are grateful for your messages and encouraging words.  Jeremy and Jessica Ruse of Urban Custom Bikes, thanks for being a part of our pit crew and taking care of us on such short notice. The sheer wear and tear on our machines was expected. I personally went through two and a half sets of tires, four full services and a bracket that busted all to hell. Jim suffered a nail puncher to his rear tire but could plug it and continue the ride. Reef’s machine suffered two issues, water in the fuel and a disintegrated fuel filter. The first may have led to the second, but overall, we were properly prepared for all types of unexpected incidents. Being able to plug a simple nail puncture or having zip ties with you can prevent you from ending your trip to having to pay expensive tow fees.

Jim’s take away from this journey was proper preparation. Do your research, check, check, and re-check. Riding with a group is different from riding by yourself. Be flexible and stay fluid. Be aware of climate change when riding through different regions. There may be a 50-100-degree difference from one state to the next.  More importantly, take it all in, enjoy the sights and people you get to meet while you’re riding, because that’s where memories are made.

Reef’s take away from this journey was to enjoy the ride, and to always plan for the unforeseen. He stresses the point to meet people and always aspire to inspire others to get out and ride their ride.

This was an amazing journey, a milestone achieved. It’s hard to put it all in words, and though we took lots of photos, it’s something that you must experience for yourself.  Our ultimate goal was to motivate and inspire others in the bike community to get out and ride. So, go experience North America for yourself.  Just ride, enjoy and make your own memories.  Life is too short and we only have one life to live. 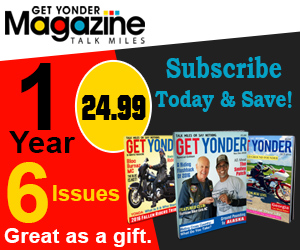 Ground Pounding Extremes: He Traveled to 48 States in 7 Days!!