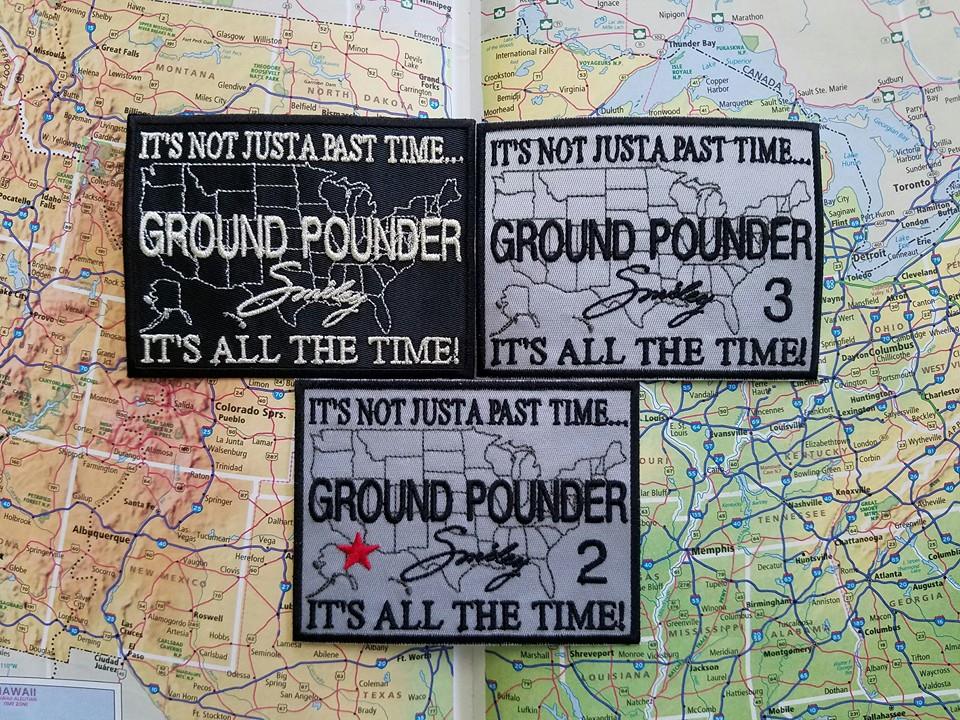 If you’ve ever taken the time to look up the term Ground Pounding on any search engine, your results will probably come up short! Though the term has become quite popular in what we associate as the Urban Motorcycle Community, it still lacks a definitive meaning. Ground Pounding has become a relative term, and its meaning will differ according to who’s addressing the subject. However, for purposes related to this article, let’s define the term as: riding your motorcycle for extended [distances] over a period of time!

When I think of Ground Pounding, I instantly think of the extremes……not to discredit anyone, yet to set a standard from what’s considered the norm! In celebrating the first article of my Ground Pounding Extremes Series, four men come to mind, all deserving to be acknowledged for their Ground Pounding achievements. They are: Hugh Smith (Highway Smiley-Kings of Cali MC), Kenneth Andrew (from Arkansas), Shareef AsSadiq (Reef-Chosen Few MC), and Rodney Neely (Boss-Next Level MC). Each of these men have traveled to all 48 states in one continuous trip, and two of them have completed the trip twice.

Kenneth Andrews, an independent rider from Arkansas has done the 48 state-run twice. As a member of the Iron Butt Association (IBA), he set out to qualify for the 48/10 challenge (48 states in 10 days). In order to certify his ride for IBA, he was required to stop at designated places to obtain receipts as verification. For his first trip, he left on June 19th, 2015 on his Harley Davidson Road King. He completed his trip in 9 days 23 hours and 32 minutes. After arriving back home, he started to gather his receipts and paper work to submit to the Iron Butt Association to have his ride certified and notice that there was one receipt missing. He didn’t get the Florida receipt that he needed, so what did he do……of course….he did the entire 48 state-run again, but this time leaving in August (less than 2 months later). His second trip would take 9 days and 16 hours, a few hours less than before, finishing on August 19th. On Kenny’s first trip, he rode the last leg of the trip 26 hours straight, covering 1580 miles and 11 states. He also advised of the severe weather he encountered on his first trip, stating that he rode through a hail storm in Washington state coming out of the mountains. His second trip had beautiful weather which made his trip more enjoyable.

Kenny advised for his trips, he packs a tool kit, his rain gear, protein shakes and change of clothes. He also stated that he drinks C4 powdered dietary supplements to help with energy and alertness while riding. He carries a small “signature book” which he uses to allow people that he meet along his trips to write their name and signature. Ironically, Smiley and Reef both have signatures in his book. He also shared that he likes to stay at hotels that have a bar near due to his love for sharing his stories and meeting new people.

Having followed Kenny’s first 48/10 challenge via the IBA Facebook page, Reef was inspired to do the trip as well. He had initially plan to do the challenge in 2016, however his wife encourage him to go ahead and do it. He contacted Smiley and the two decided to travel together on their 48 state-run. This would also be Smiley’s second trip, as the first was completed with his wife Sandra (Dimples). Smiley traveled via a Harley Davidson Road King, while Reef preferred a Victory Cross Country. Using a route that Reef received from a fellow IBA rider, their trip was completed in 9 days 1 hour and 17 mins. This consisted of them traveling from Needles, California and ending in Umatilla, Oregon. Their trip may have been shorter, however, Reef hit a deer in the state of Montana on Hwy 12. The official route taken on the trip totaled 7,765 miles. There were two days that they traveled a minimum of 1,000 miles, and some days in temperatures above 100 degrees. During the course of their trip, the men also visited the Three Corners Monument (Kansas, Oklahoma & Missouri) and the Four Corners Monument (Arizona, Colorado, New Mexico & Utah). These are the point where the indicated states meet.

In addition, Kenny followed Smiley and Reef using an app called Spotwalla, a real-time GPS tracker, during the course of their 48 state-run. Kenny reached out to them and they agreed to meet in his state of Arkansas. He met and rode with Reef and Smiley for over an hour before heading back home. It was their first time meeting and Reef and Smiley was able to sign the famous “signature book.”

I inquired from both men, the things they considered to be essential in making their trip the most comfortable. Reef stated that he wore Long Distance Comfort gear and was sure to pack Monkey Butt, rain gear, chaps, and his Glock for his trip. He also stated that he took Aleve pain pills every 8 hours, two days prior to the trip, and then every 4 to 5 hours during the course of the trip. He kept spicy peanuts and pistachios in his pockets to eat while riding and drinks Gatorade, water and V-8 tomato drinks. He also drinks Ensure for nutrition while on extended trips. As for Smiley, his list was similar. He travels with a tool kit, Monkey Butt, weather gear, Chopper Chap (chapstick), and a Camelback water pack. He also likes to keep sunflower seeds in his pocket in the event he starts to get sleepy and also drinks Ensure on his trips for nutrition.

Rodney Neely-Boss left for his trip on May 11th, 2016. His trip was completed in 13 days and consisted of 10,675 miles. Boss shared that his additional mileage came from him wanting to see more of each state, as oppose to just taking state signs. While riding in Vermont, he was so consumed with the sights that he ended up getting lost in the mountains, not paying attention to the signs. His GPS signal also went out because of his location. He ended up back tracking his route in order to find his way back to a main road. He also shared that he encountered terrible weather for most of his trip and ran into mechanical issues that he was able to resolve. He ended up getting a hotel in Oklahoma City due to the tornadoes that they were experiencing. He also ran out of gas, twice….which was actually funny to him. However, he was prepared, having a spare gas can on his motorcycle. He also mentioned the fact that in the state Iowa, it was difficult to find premium gas. He rode to different gas stations, until an officer advised him of a BP gas station an hour from where he was.

For his trip, Boss carried a tool kit, three change of clothes, a cooling vest, heated gear and rain suit, Aleve pain pills, Lysol, and of course a spare can of gas. He expressed his excitement in completing his trip and stated if he had more time off from work, that he would have continued riding. He also shared how he stopped at a small town, and instead of them having a mirror in the bathroom, there was a sign that said, “Well now, aint you Purdy!” He thought it was the funniest thing and took a photo of it. There was also a sign with the store hours posted that said they were open “From Sun up to Sun down!” On a serious note, he also wanted to mention his gratitude for the level of prayers and support he received. Due to some of the issues that he faced, it was proof to him that someone, somewhere was praying. He also appreciated the calls and messages he received from Smiley and his president, Julius Smith (Juice), during the course of his trip.

As a result of the 48/10 challenge that Smiley and Reef participated in, Smiley decided to design a patch for any rider that rode their motorcycle to 48 states or more. This patch consists of a white and black design, however the red star indicates that all 48 states were done in one trip! The current four recipients of the patch with a red star, are the four men mentioned in this article. The patch includes a signature of Smiley’s name and his infamous ” It’s Not Just A Past Time….It’s All The Time!”